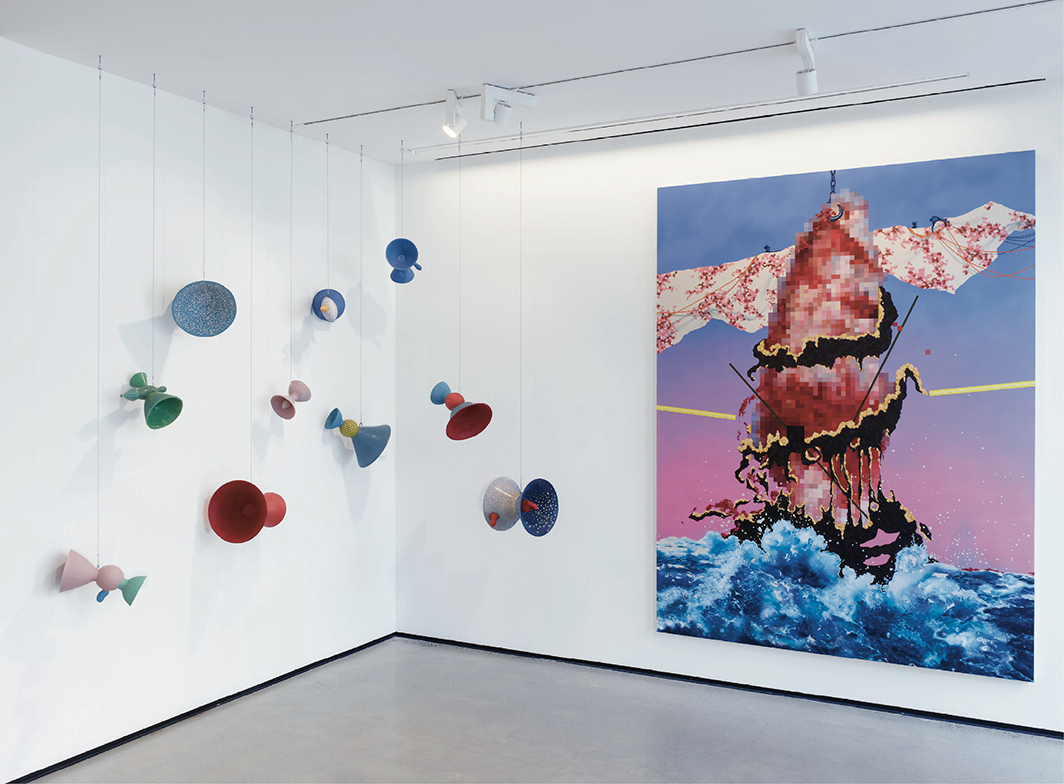 Eleen Lin and Tammie Rubin have insightfully reinterpreted fiction and history in “Mythodical” at C24 Gallery. The title analyzes the show’s themes of personal and cultural mythologies – both their making and their undoing – and how each artist brings a method to this madness. The curatorial pairing of Lin (painter) and Rubin (sculptor) was complementary, each presenting work spanning several years, demonstrating how their individual practices have evolved and deepened over time.

Rubin’s vast coterie of serialized objects – over a decade old – was an exploratory index of lineages, lamentations and groupings. Among the works on display, the Austin-based African-American artist presented a recent iteration of nineteen variously glazed cones from the series “Always & Forever (forever ever, ever)?” 2016–, in pigmented porcelain. The verdigris-colored helmet-like shapes vary in width and height, but all share textured patterned surfaces created via sgraffito, braille-like extrusions, and inlays. Their hooded shapes and cutout eyeholes were reminiscent of Philip Guston’s grotesque Klansmen. Rubin’s objects are touching: there is something both dark and sardonic in their motley heterogeneity; the funnel shapes also resemble dunce caps, religious contrafraternity headgear, and stupas.

There is also an effervescence in most of Rubin’s sculptures, as in A joyful maturation, Helloand The beauty of insignificance, all from 2014 – three bulbous stacks of spherical shapes in bright earthy colors. These elegantly assembled settlements seemed delightfully lively. Silence magical thinking, 2009, included several mobile-like aggregations suspended from the ceiling in one corner of the gallery, tilted at considerate angles. They weren’t just cheerful, but had a communicative quality akin to antique auditory trumpets, gramophone speakers, or satellites. In each series, Rubin’s forms were skilled shapeshifters who could be toys one moment and silent reliquaries the next.

Lin’s vivid, large-scale, dreamy oil and acrylic paintings, produced over the course of a decade, are inspired by wonky Mandarin translations by Herman Melville. Moby-Dick (1851). His backgrounds, made of thin acrylic washes, literalize the nautical setting of the novel – the liquefaction is also a nod to the fluidity of India ink paintings. Lin’s compositions are fluid and relentlessly luminous. Based in New York, the Taiwanese-born painter addresses many facets of culture and history. What is lost (or added) in translation is not a dilemma for Lin, but a chance to explore strange serendipities while inventing new morphologies.

These reworkings of the novel’s scenes and themes show something both retro science fiction (as whimsical as Jules Verne’s 1870 novel Twenty thousand leagues under sea) and hypercontemporary. The suspense and the doom The perils of life, 2022, shows an inflatable boat, crowded with people, adrift. A face is skeletal, a skull and crossbones, while a solitary figure sits atop an overturned boat nearby. Another ship is idle, moored with rope or fishing line. On the surface of the water is a white whale or jellyfish with outstretched tentacles, an oozing and ectoplasmic stain, both horrifying and fantastical. The title of the work echoes Moby-DickThe language of: “All men live wrapped in whales. All are born with halters around their necks; but it is only when caught in the swift and sudden twist of death that mortals realize the silent, subtle, and ever-present perils of life. The artist over-Melvilles Melville with polychromatic ocean beasts, cross-continental and cross-cultural crossovers, and intergalactic geometries that come together to form new fiction born out of gaps. Seeing Lin and Rubin’s work – together but apart – makes for adventurous viewing, with each artist rewriting the narratives at every turn.