An epic fable from Russia is our pick of the week

An epic fable from Russia is our pick of the week

What is that? A Russian epic about a Russian hero.

Why see it? If you only know Aleksandr Ptouchko’s film under the title The Sword and the Dragon (or via its appearance on Mystery Science Theater 3000) then you really don’t know at all. The complete film is an epic fable packed into ninety minutes of beautiful Russian scenery, action set pieces, creative practical effects and heroism. The story is based on an old legend about a hero who holds back the Mongol hordes and their fire-breathing dragon, and it’s a fantastic time that feels like a story punctuated by silliness, sincerity, and Ray Harryhausen. Deaf Crocodile’s new 4K restoration is stunning and their new Blu-ray release is a beauty. Anyone who tells you that older Russian films are boring has never seen this gem. What is that? A musical about the creation of the Declaration of Independence.

Why see it? The popular (at the time) musical gets an epic big-screen adaptation with a TV-friendly cast (William Daniels, Ken Howard, etc.), and the result is a weird mix of music, laughs, and sadness. truths. On that last point, the Continental Congress hits a wall over slavery, and a single Southern representative holds the Constitution hostage until he agrees to remove the section that would have essentially freed them. The film is sometimes played for laughs, played for drama at others, and while the second act sags, the film as a whole is an engaging look at the messed up foundation of a messed up country. This new UHD offers both the director’s and extended cuts in 4K and the cinema on Blu-ray. What is that? Adult superhero shenanigans.

Why see it? Eric Kripke’s wildly entertaining adaptation of the popular comic book takes what has become a trope in its own right – what if superheroes were jerks – and turns the dial up to eleven. Graphic violence, sexual situations, Nazis, death by a super long cock…this show is amazing. It’s incredibly fun with its gags and high-profile scenes, but it also lands a few punches in its commentary and emotional situations. It is also an often surprising watch as the characters and plots take very unexpected turns. Those with strong stomachs and comfortably loose morals should catch up quickly because season three is even more absurdly insidious. What is that? A preview of the production of Buster Keaton’s latest short.

Why see it? The latest release from a great new label (Canadian International Pictures) combines two short films from the 60s. The first is a documentary made during the production of “The Railrodder”, which was Keaton’s last film, and it is a must-have for fans as it explores his life and career while documenting the man’s approach to comedy and film. The Next Step is a documentary on Canada’s vast beauty offering stunning photography and observation that is both entertaining and educational. What is that? Two taxi drivers go in search of a missing man in Chinatown.

Why see it? Wayne Wang’s low-budget character study from the early ’80s is something of an indie noir. It’s incredibly raw with its black-and-white photography and mostly amateurish cast, but there’s an understated sense of humor and charm at play here as our two leads extend their search into alleyways, hotels and the kitchens of Chinatown. More than that, however, the film becomes a quasi-existential look at a search for Chinese-American identity with the missing man as a stand-in for something much bigger. It’s a fast and attractive watch offering an appealing look at the everyday streets of Chinatown in 1982. What is that? A masterclass on film noir.

Why see it? Billy Wilder in the director’s chair is already close to guaranteeing a good time, and that’s only amplified by his script co-written by Raymond Chandler. Fred MacMurray plays a regular jerk who gets sucked into the life-and-death shenanigans of a gorgeous lady (Barbara Stanwyck), and while the story offers dark turns, there’s a satisfying nature to the grim truths. Much of that satisfaction comes in the form of deliciously wicked dialogue delivered with wit, speed, and salacious intent. It’s the kind of ’40s movie that’s endlessly quotable and nasty, and Criterion’s new Blu-ray is the way to watch (unless of course you opt for their 4K UHD version instead) . What is that? A stranger comes to town and trouble ensues.

Why see it? Sergio Leone and Clint Eastwood’s first collab might not garner the love of the two that followed, but it’s quite the western classic. The story is directly inspired by that of Akira Kurosawa. Yojimbo and pits Eastwood’s stranger against two rival gangs in a small border town. Intense action, menacing looks, an Ennio Morricone score, gorgeous views – that’s a good one. Kino’s new 4K UHD offers several extras, but the biggest selling point is the picture that shines with rich color and depth. 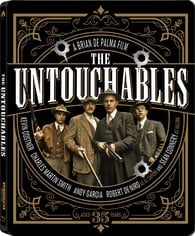 What is that? Eliot Ness confronts Al Capone in the streets of Chicago.

Why see it? Easily Brian De Palma’s most commercial and accessible film, The Untouchables remains a fantastically entertaining look at the difficult times of Prohibition. Kevin Costner shines as a two-shoe man who has to get his hands dirty if he wants to make a difference, and Robert De Niro is just as convincing as the brutal Capone. Throw in Sean Connery, Andy Garcia, Charles Martin Smith and other familiar faces, a stunning score by Ennio Morricone, sharp cinematography and a clever screenplay by David Mamet, and you’re in for a great time. This new 4K UHD version probably won’t wow you, but it’s clearly the best the movie has watched on home video.

What is that? A high school endures a tough race for class president.

Why see it? Teen comedies have never gone out of style, and while some are obviously better than others, there’s no shortage of mediocre ones. The highlight of this late ’70s comedy is the cast with Bruno Kirby, Lee Purcell, Tim Matheson and John Friedrich all doing fun and fresh work. The story pits the contestants against each other while offering a few little moral lessons, and the character beats take precedence over the T&A which is kept to a minimum. It’s a perfectly fine movie.

What is that? An influential American travels to Australia to help boost business.

Why see it? It’s a rather bizarre concoction (American star! Serbian director! Aussie local!) that doesn’t always work but still finds a certain charm. Eric Roberts plays a tough executive who travels to Australia to help bolster local sales of Coke products – the film was in no way endorsed or endorsed by Coca Cola – but instead finds romance, eccentricity and a new approach to life. There are some humorous beats here as the cultures clash, but it’s played at times perhaps a little too odd for its own good, as the tone and content waver. Add some gratuitous nudity to Greta Scacchi and it looks like a movie that doesn’t quite know how to sell itself.

What is that? Aliens bring nine humanoids to Earth for a battle royale.

Why see it? The ’80s were a crazy time, and that includes the slew of low-budget genre films vying for our attention. This one takes a familiar premise — strangers coming together to fight to the death — and executes it on a $5 budget. Fans of such companies will probably appreciate it, but there’s not really enough here to justify looking past its shortcomings. The action is the only place to thrill, but it’s underwhelming and less exciting than the hair and costumes.

Also out this week: