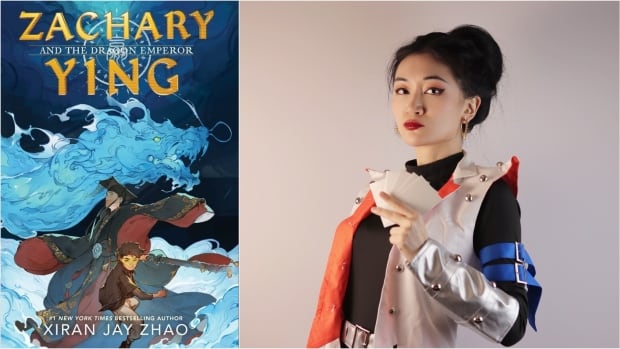 May is Asian Heritage Month in Canada. To celebrate, here is a list of 10 Canadian books for young readers by Asian Canadian authors to check out!

In the mid-level novel Zachary Ying and the Dragon Emperor, a boy named Zachary Ying embarks on a mission after discovering that he was born to welcome the spirit of China’s first emperor. His journey takes him across China to rob magical artifacts, defeat characters from history, and seal the leaking portal to the Chinese underworld before it’s too late.

Zachary Ying and the Dragon Emperor is for ages 9 and up.

Xiran Jay Zhao is a Vancouver-based science fiction and fantasy writer who is also training to become a biochemist. He is a first-generation Chinese immigrant who is interested in Chinese history, cosplay, and anime. Zhao is the author of the best-selling YA fantasy book iron widow.

Rise like a storm is the sequel to the YA fantasy novel Chased by the sky. After the death of a king and a queen, a new queen emerges. But protagonist Shayla and her Sky Warriors are on the hunt – and an adventure unfolds involving magic, bounty hunters and an enchanted city.

Rise like a storm is for ages 14 and up.

Tanaz Bhathena is a children’s author born in India, raised in Saudi Arabia and currently based in Ontario. She is the author of YA books such as A girl like that and The beauty of the moment.

Lizzy and the cloud is a picture book about a girl named Lizzy and the pet cloud named Milo whom she loves and cares for. But as Milo continues to grow and grow, the time is fast approaching when Lizzy must let her pet loose.

Eric Fan and Terry Fan are brothers and frequent collaborators on children’s books. Their books include The Night Gardener and The ocean meets the sky. They also illustrated The darkest darkness by astronaut and author Chris Hadfield.

A story about navigating between different cultural identities, Bharatanatyam in ballet flats follows Paro, a girl who dances Bharatanatyam with her mother at home and is also excited to learn ballet. Although they may be very different, Paro navigates how to appreciate and excel in both.

Bharatanatyam in ballet flats is for ages 3 to 6.

Mahak Jain is a Toronto writer and author of books for young people and adults. His picture book Maya, illustrated by Elly Mackay was named Best Book of the Year by Kirkus and winner of the 2017 South Asian Book Award. Mahak lives in Toronto.

Chouhan is an illustrator from Burnaby, BC Trained as an animator and character designer, Chouhan often combines her love of Bollywood, anime, and global fashion into her art. She enjoys creating art that celebrates diversity and empowerment.

In the intermediate level book Will, a girl named Jennifer has superhuman abilities. When an accident occurs and her secret is discovered, Jennifer’s father is taken away by the authorities. Jennifer must find a way to save him before it’s too late.

Marty Chan is an Edmonton-based children’s book author. His other books include Kung Fu Masterhaunted hospital, the Chronicles of Ehrich Weisz and the Guardians of the Vault series.

The final book in the Tails from the Apocalypse series is Valhamster. Emmy the hamster is a formidable zombie fighter and embarks on a journey to defeat the undead creatures once and for all. But when Emmy is betrayed, she embarks on a solo mission and learns the meaning of courage and friendship along the way.

Angela Misri is a Toronto-based journalist and author of mystery novels and children’s books. Her detective series, titled The Portia Adams Adventuresis set in the 1930s and its mid-level series is called Tales from the Apocalypse.

The Not So Uniform Life of Holly-Mei is an intermediate level book about Holly-Mei Jones, a young girl from Toronto who moves to Hong Kong when her mother finds a new job there. But moving means a new life – and leaving the old one behind. It takes determination and a positive attitude for Holly-Mei to adjust to her new world.

The Not So Uniform Life of Holly-Mei is for ages 8 to 12.

Christina Matula is an Ottawa-raised author. She holds a master’s degree in creative writing from the University of Hong Kong and now lives in Finland with her husband, two children and puppy.

Located in the Regent Park neighborhood of Toronto, Wrong side of the court is a children’s novel about basketball, dreams and violence. Fawad, 15, wants to be the first-ever Pakistani Canadian to be drafted into the NBA. But life in his neighborhood sometimes involves bullies and bad situations – things Fawad tries to avoid. Fawad navigates between love, dating, family life and a passion for basketball as he tries to build a better life for himself.

Wrong side of the court is for ages 12 and up.

HN Khan is a Pakistani-Canadian writer and author. Khan immigrated to Canada at the age of seven and grew up in the community of Regent Park in Toronto. He is a recent graduate of the correspondence program at the Humber School for Writers. Wrong side of the court is his first book.

Shawala! is a picture book inspired by the author’s childhood travels to India. Shawala! is about a young girl and her mother at the train station. They line up for a cup of hot chai, and the young girl takes note of all the delicious smells and sights around her.

Priti Birla Maheshwari is an Ontario author and educator born in New Delhi, India. Shawala! is his first picture book.

Ashley Barron is a Toronto-based artist and illustrator.

Located in Korea’s 18th century royal court, June Hur’s The red palace is a YA murder mystery laced with elements of romance. The novel follows Hyeon, the illegitimate daughter of a concubine, who works hard to get a job as a nurse at the palace. When four women are suddenly killed and her mentor is framed for the crimes, Hyeon teams up with a young police inspector to find the real killer.

The red palace is for ages 12 and up.

June Hur is a Toronto-based writer originally from South Korea. She is also the author of The silence of the bones and The Forest of Stolen Girls.